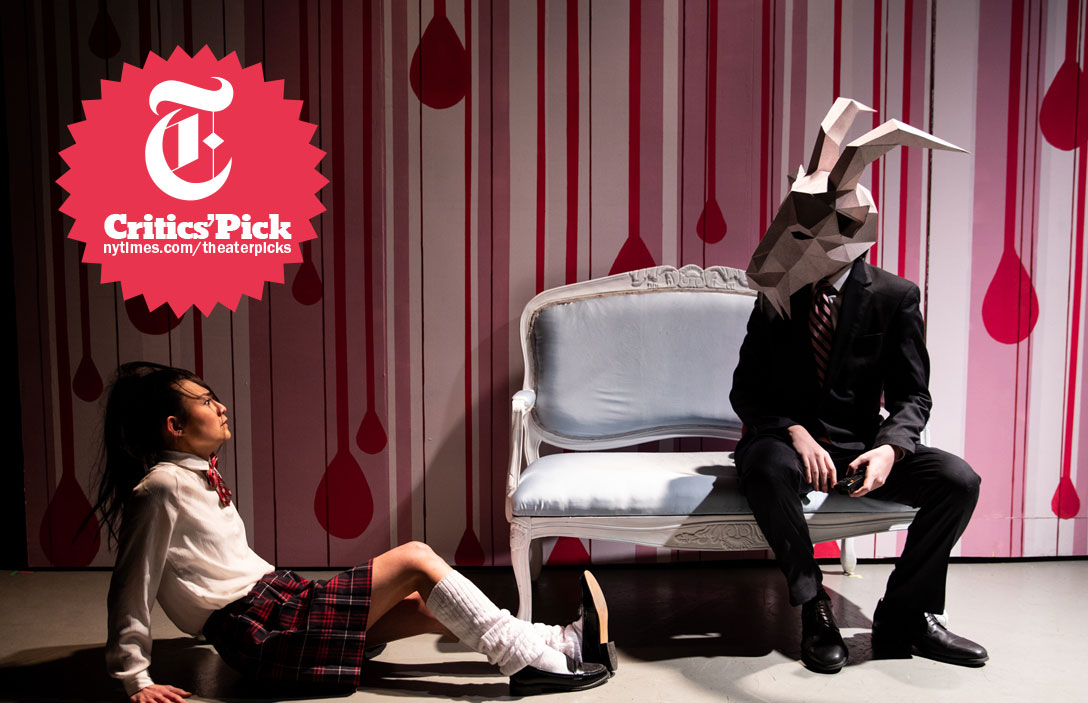 If there is a way to write about Kristine Haruna Lee’s vivid, haunted Suicide Forest without mentioning the ending, I don’t know what it is. Because when the fourth wall breaks, this nightmare-vision play about Japanese-American identity cracks wide open, and what’s underneath is so heart-stingingly tender and explicitly personal that the whole work shifts.

Here, then, is an emphatic piece of advice: Go see it at the Bushwick Starr, where Aya Ogawa has directed a wild ride of a production. And here is a warning: spoilers dead ahead.

The first figure we see in Suicide Forest, moving slowly around the edge of the proscenium, is a god in scarlet silk. White-faced and raven-haired, with soft red pigment at the corners of her eyes, this is Mad Mad. Her presence stalks this play.

Ms. Lee is also an actor in it, portraying a teenage Japanese schoolgirl named Azusa. But deep in the performance, after the vibrant pink-and-white interior of Jian Jung’s set has given way to the eerie abstractness of the woods, Ms. Lee drops the mask of her role. She becomes, disarmingly, her Seattle-raised self, speaking directly to the audience, taking ownership of the issues of heritage that fuel her play.

“I want to confess,” she says, “I grew up with a mother who I can never fully communicate with. Language barrier.” Her mother, she explains, is “100 percent Japanese.”

“So I guess that technically makes me 50 percent Japanese,” Ms. Lee adds. “But that percentage is a lie. Sometimes I feel like I’m only 33 percent? Other times, as high as 70 percent. I am also, usually, a high percentage of American too.”

Presented with Ma-Yi Theater Company, Suicide Forest is a tussle between those parts of her. You can feel Ms. Lee resisting any sort of conformity.

Performed mostly in English with some supertitled Japanese, the play is made up of short, sharp vignettes set in 1990s Tokyo and in a forest like the infamous Aokigahara, where many people have gone to kill themselves.

Ms. Lee leans hard and deliberately into stereotypes, her central figures versions of stock characters: a salaryman (Eddy Toru Ohno) in his 60s tempted by suicide, and the plaid-skirted Azusa (costumes are by Alice Tavener), who is preyed on by the salaryman. His own teenage daughters (Akiko Aizawa and Dawn Akemi Saito), with pigtailed hair in cotton-candy colors, are alarming manifestations of femininity, at once hypersexualized and infantilized.

Spectators without any Japanese heritage might not know quite what to make of it, at least not until Ms. Lee breaks that fourth wall.

Then, very close to the end, another actor joins her onstage: Aoi Lee, who plays Mad Mad.

“This is my mom,” the playwright tells us, protectively. “She dances Butoh.”

As she asks her mother questions in English, and translates the answers that the elder Ms. Lee speaks in Japanese, the gorgeously conflicted complexity of “Suicide Forest” is movingly on display.

For a haunted daughter, this play is an exorcism. But it is also an embrace.