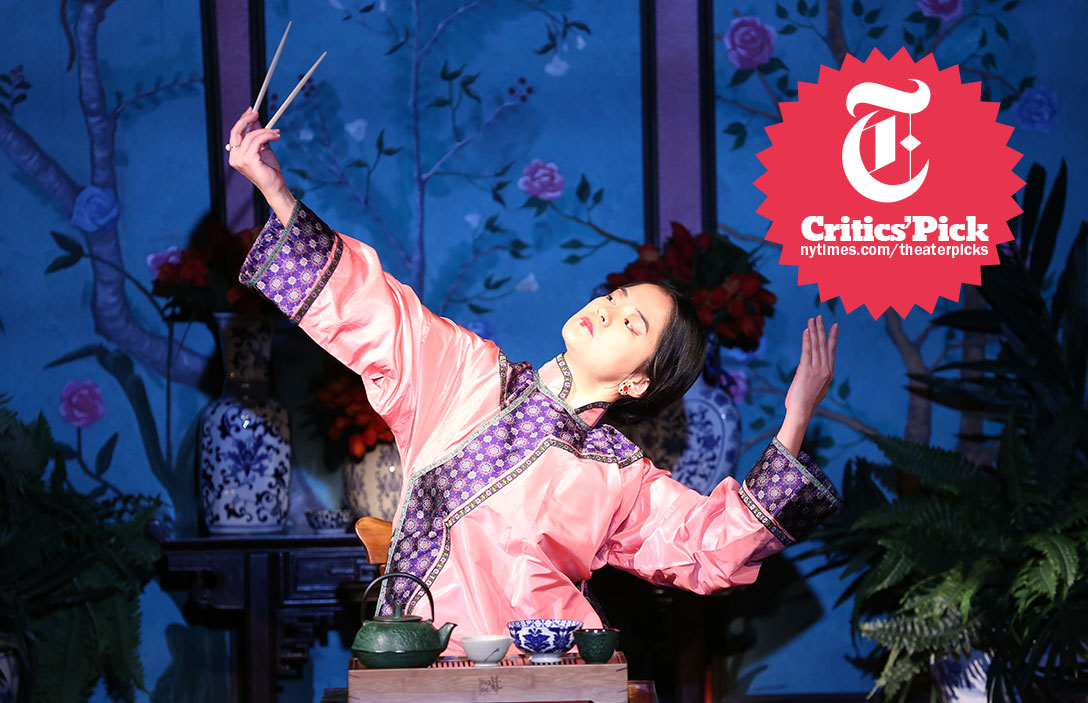 The teenage Afong Moy made headlines when she arrived in New York by ship in 1834. It’s impossible to prove that she was the first Chinese woman in the United States, but it’s certain that she was a rarity, brought here to be displayed before paying crowds of gawkers.

“It is human nature to be curious,” she tells us in Lloyd Suh’s piercing and intimate new play, “The Chinese Lady,” a time-skipping, gently comical drama inspired by the story of the real Afong Moy.

Chattel in a two-year deal struck between her family and some American importers, Afong (Shannon Tyo) is just 14 when the play begins. Aided, and sometimes foiled, by her put-upon translator, Atung (Daniel K. Isaac), she spends her days performing a distorted version of Chinese identity.

Inside a little room decorated in chinoiserie, she is a living, breathing museum exhibit: price of admission 25 cents, 10 cents for children. Dressed in a silken costume (ooh!), she eats with chopsticks (ahh!) and — here comes the highlight — even walks around the room on her tiny bound feet.

“I have noticed that my feet are a source of constant fascination,” she muses as she takes her little stroll. But Afong likes her feet, and she can’t help noticing, too, that some practices in the West are at least as barbaric as foot-binding is purported to be.

“Such as corsets,” she says lightly. “Or the trans-Atlantic slave trade.”

Dexterously directed by Ralph B. Peña for Ma-Yi Theater Company, this quiet play steadily deepens in complexity as we trail the idealistic Afong and the more knowing Atung through the decades, bickering with each other all the way. Ms. Tyo and Mr. Isaac have gorgeous chemistry, and with their rapport they cast a spell that Fabian Obispo’s music and Oliver Wason’s lighting unobtrusively fortify.

The clever set (by Junghyun Georgia Lee, who also designed the costumes) begins as a shipping container, which opens to become the room in the museum. These are the walls that box in Afong and Atung’s cultural identity, as seen through white American eyes.

It’s that gaze that infuses this beautifully acted play with pain and shame and sorrow — so it is both practical and kind that Mr. Suh has softened his script with humor. Because of course it is also human nature to look on difference with suspicion or hostility. That has been a wounding part of the experience of Chinese people in this country, which barred them from citizenship — and severely restricted legal immigration — for many years.

Though Afong didn’t come to the United States voluntarily, and didn’t mean to stay, “The Chinese Lady” is an immigrant’s tale. We watch her slowly acclimate to her new country, and grow more distant from the nation of her childhood.

Throughout, she retains the palpable loneliness of an only — someone who, by virtue of being so outnumbered, is judged as a stand-in for an entire population. But by the end of Mr. Suh’s extraordinary play, we look at Afong and see whole centuries of American history. She’s no longer the Chinese lady. She is us.